We Are Not This Map

“We are not this map”: connecting struggles for land and justice in Skye and the Amazon.

Easily mistaken for one of its prehistoric cousins, the Duirnish Stone towers over the village below. But it was not raised in honour of some long-forgotten astral deity. Instead, it stands in recognition of community: having been raised to mark the millennium and hauled up from the foreshore by hand and rope.

The two women, along with Maria Leusa’s five-year old daughter Victoria, have made the journey to Europe in search of solidarity in their struggle against the forces threatening their indigenous and traditional territories in the Amazon’s Volta Grande do Xingu and Tapajos regions.

Their trip to Skye will be followed by a Beltane gathering at GalGael in Govan, meetings with EU officials in Brussels, and with Swiss investors hungry for the gold that lies beneath their homeland.

These struggles have taken on an ever-greater intensity since Jair Bolsonaro’s regime came to power in 2019. The right-wing President has consistently attacked indigenous rights and opened up greater tracts of the rainforest to commercial interests, recently using the war in Ukraine as a pretext for expanding mining operations on indigenous territory.

‘We came to show this voice, this cry of our children to Europe, the home to many of the foreign companies that support the death of our children’s lives, our people, within our home, of our territory where we live,’ explained Maria Leusa (below). 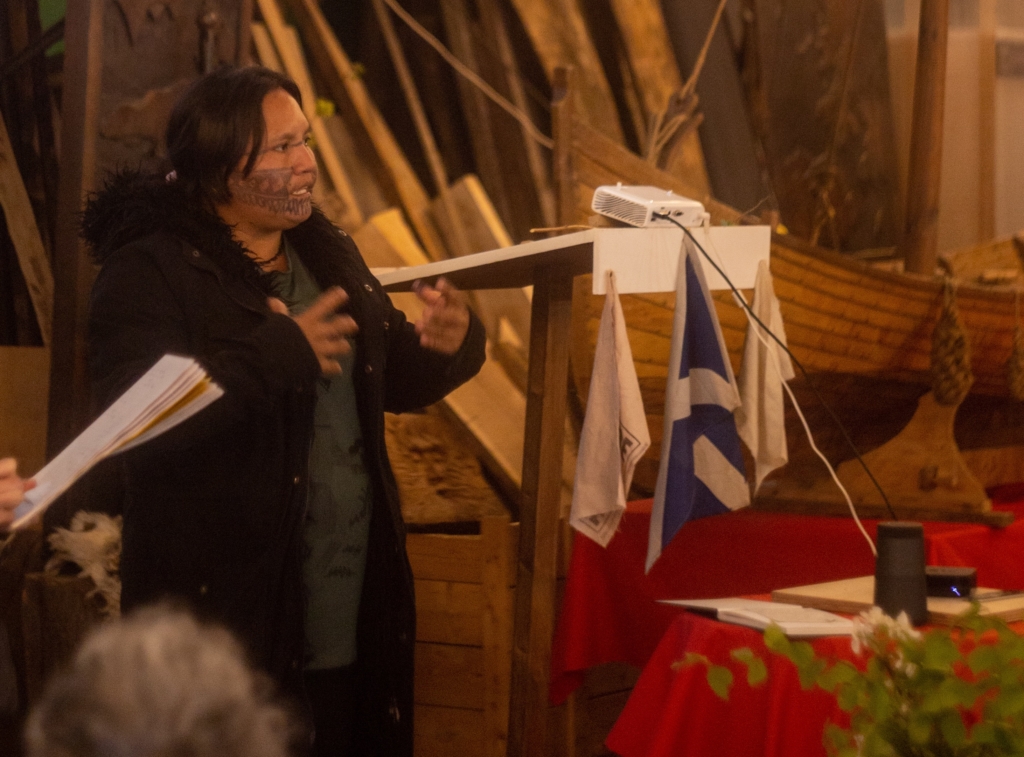 Dunvegan is one stop on a knowledge-exchange trip funded by the Scottish Universities Insight Institute aimed at addressing the increasing financialisaton of land, food and natural resources across different cultural contexts. Skye is an apt starting point: an island at the forefront of what one expert recently described as ‘a 21st Century Clearance.’

This new exodus, according to the CEO of Rural Housing Scotland Derek Logie, is driven by a broken land and housing system: ‘it is young people who are having to leave rural communities – not forced out in favour of flocks of sheep, but by flocks of tourists and the cash rich seeking a post-Covid rural idyll.’

Catherine NicDhuibhshith tells Ana Laide and Maria Leusa how her native village of Dunvegan is still hemmed in by the decrees of the local aristocrat, MacLeod of MacLeod; how life here remains conditional upon the laird’s gift. The foreshore, pier, and the land desperately needed for housing are fenced-off and access is increasingly curtailed.

But there are darker dilemmas that sit behind these pragmatic concerns. The deep intergenerational trauma of mass depopulation is still present in places like Skye. Today, it has formed a kind of psychological scar tissue, with a mantra still discernible down the centuries – people who live here are expendable.

Where Gaelic culture merged ideas of community, kin, land, and inheritance through the untranslatable the concept of dùthchas: elites, enriched by colonialism, could only see a commodity where once there was a culture.

Two centuries later the blindness of extractive land use is lived out in the regular brutality experienced in the Tapajos River basin. In May, the village where Maria Leusa lives was invaded by illegal mining contractors, who set fire to her home and that of her mother, chief Dona Isaura, destroying the entire village. Despite ongoing threats to Munduruku leaders the Brazilian state has consistently failed to offer adequate protection.

The differences between the Highlands and Islands of Scotland and the Amazon are more revealing than the commonalities. Human rights laws – which could now be turning in favour of land reform in Scotland – have little currency on the frontier of the global economy, where the insatiable appetite for cheap land and raw materials bites.

Situated at either end of the new global carbon economy, the Amazon and the Highlands and Islands of Scotland are mirror images of each other. Both offer a ‘wilderness’ that is to be tamed and commodified – the rainforest through the destruction of its indigenous life, the Highlands through a variety of different schemes through which investors can ‘offset’ their carbon emissions, and the destruction of global ecosystems this causes.

MacLeod, whose 800 year-old estate predates European arrival in the Amazon basin by five centuries (and whose ancestral wealth is partly derived from the Atlantic slave trade) has hopes of becoming something of a trailblazer amongst the new variety of ‘green lairds’ at the forefront of developing their ‘natural capital.’ A vast rewilding project is scheduled for the 42,000 acre Macleod estate, boosted by a £1 million grant from the Scottish Government in 2020.

The money might be public; but the process is not. The people are still shut out. A recurrent theme on this trip is identified by Catherine, then sharpened into a question that is all too easily shirked by those in power: ‘How many times will the wealthy, landed elite be recompensed for inflicting cultural and personal damage and misery under the guise of industry or environmentalism?’

Increasingly ‘green’ finance is luring companies like Aviva, Standard Life and BrewDog to the Highlands – eager to ‘offset’ their carbon emissions while taking advantage of a rich array of tax breaks and incentives. This, in turn, has exacerbated rural inequalities and inflated the price of rural land. Real-estate agent Savills recently claimed that $2.5 billion worth of investment is currently seeking out rural land in Scotland.

During a Beltane cultural exchange at GalGael in Govan, Ana Laide stands in front of a map of the Volta Grande (the ‘big bend’ of the Xingu river basin) scarred by the encroachments of the Canadian Belo Sun Mining Corporation.

Ana Laide remarks: ‘We are not this map. This map hides us, it only presents the greed of people who are here to exploit our lands and enslave our hands.’

The 8,000km of ocean between Maria Leusa and Ana Laide’s native Pará, the northernmost state in Brazil and Skye is improbably vast. Mighty structures of race, colonialism and empire were brought into being to conquer it.

Those big abstract concepts might seem old and outdated – but such an assumption overlooks the material realities of the situation. The majority of this country’s livestock feed originates in Brazil, much of it delivered through the notorious multinational Cargill, deeply implicated in deforestation. Progress here – in the shiny new offices of BlackRock in Edinburgh or the Barclays campus in central Glasgow, conceals corporate activities that speed destruction of indigenous territory in the Amazon.

All of this comes down to what, and who, land is for.

The response of capital to climate change rests on the absurd notion that some kind of global balance sheet can tally up every act of extraction with a compensatory act of restoration elsewhere; as though a mahogany felled in the Amazon can be atoned for by a patch of douglas fir in Sutherland. In both cases the people who know the land and its potential for life better than anyone – the indigenous peoples who actually live there  – come last. Indigenous knowledge of place, at the heart of any thriving community, carries with it a deep understanding of these absurdities. For both the green and extractive forms of commodification to succeed the land must be emptied, not just of people, but of memories, names and folkways too.

On the way back from the Duirnish Stone an impromptu stop at the ruins of the nearby St Mary’s kirk offers an unexpected moment of clarity and connection.

The women stand by the grave of a family from Glendale – the sight of a major struggle in the early years of the Highland Land League, and later Scotland’s first community buyout in 1908. It was noted that, unlike all the other gravestones, those of the lairds were hidden away inside the ruined kirk.

‘It is better to be outside the walls,’ observed Ana Laide.

Everywhere the landlords are trapped inside: it’s our task to set them free.